THE CRAFTING OF A MIDQUEL: YES IT'S A THING!

After the release of Steel Eyes, I knew this exciting character had many stories to tell. In Steel Eyes, the emphasis is on how an unknown lesbian becomes the first anonymous rock guitar legend, falls in love, and changes the world with her music and spycraft. Got all that? Above all else, the story's core is a gritty, always passionate tale of love, music, and the one girl who almost got away.

But, between Parts Two and Three, there existed a seven-year gap where the rock star goes underground after being shot onstage. The world is shocked and saddened, believing she had died. No one, including me, ever really knew what had occurred during those seven unaccounted for years before Part Three. Hence, the midquel—the story set within the timeframe of Steel Eyes.

In my upcoming release, Skin In The Game, we learn Kenna Waverly wasn't only hiding out in Jamaica swimming and eating pineapple—she was doing spy stuff. This book takes place in a snippet of time during the end of that seven-year hiatus.

The research for Skin In The Game was some of the most daunting I'd ever encountered. Months poring through FBI archives, reading Congressional testimonies, and studying actual international crimes. Only then could I craft a credible tale of intrigue, centered around Russian and Chinese hacking of the United States—and all before our current debacle of the Russians hacking our election. Roll back the technology to 2003, and boom—you've got Skin In The Game.

Sound boring? Not when it's in the hands of a sexy lesbian spy who turns heads with a steamy tango in the streets of Buenos Aires, then teams up with a stripper from her past to save the world from a global financial meltdown. Did I mention the research included pole dancing?

But what started the story-ball rolling was the power failure that caused the water plant to shut down during the 2015 Golden Crown Literary Society conference in New Orleans. Any lesbian in attendance will remember two days of bathing in bottled water during the height of the hot, sticky New Orleans summer.

I remember thinking: What if this was no accident? Yep, we intrigue authors tend to roll that way. And what better way to memorialize that event than with a sex scene in that New Orleans hotel!

Skin in the Game comes out this July 20th . 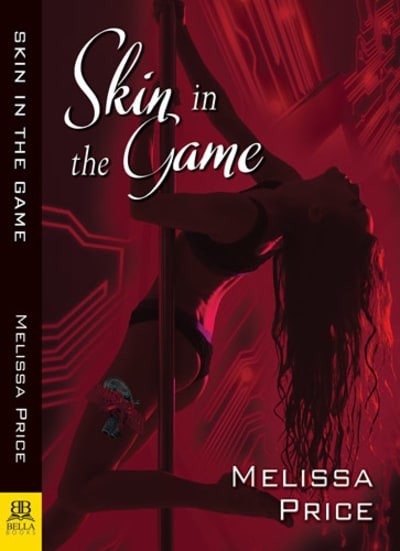 ​Title: Skin in the Game

Author Melissa Price talks about what she learned ...
HOW A SIMPLE WRITING EXERCISE TURNED INTO MY NEW R...

More posts from author
Thursday, 23 September 2021 Author Melissa Price talks about what she learned from Drag Queens
Monday, 20 May 2019 HOW A SIMPLE WRITING EXERCISE TURNED INTO MY NEW ROMANCE, "SMILE NUMBER SEVEN"
Tuesday, 01 August 2017 Skin in the Game: The Steel Eyes Story Continues