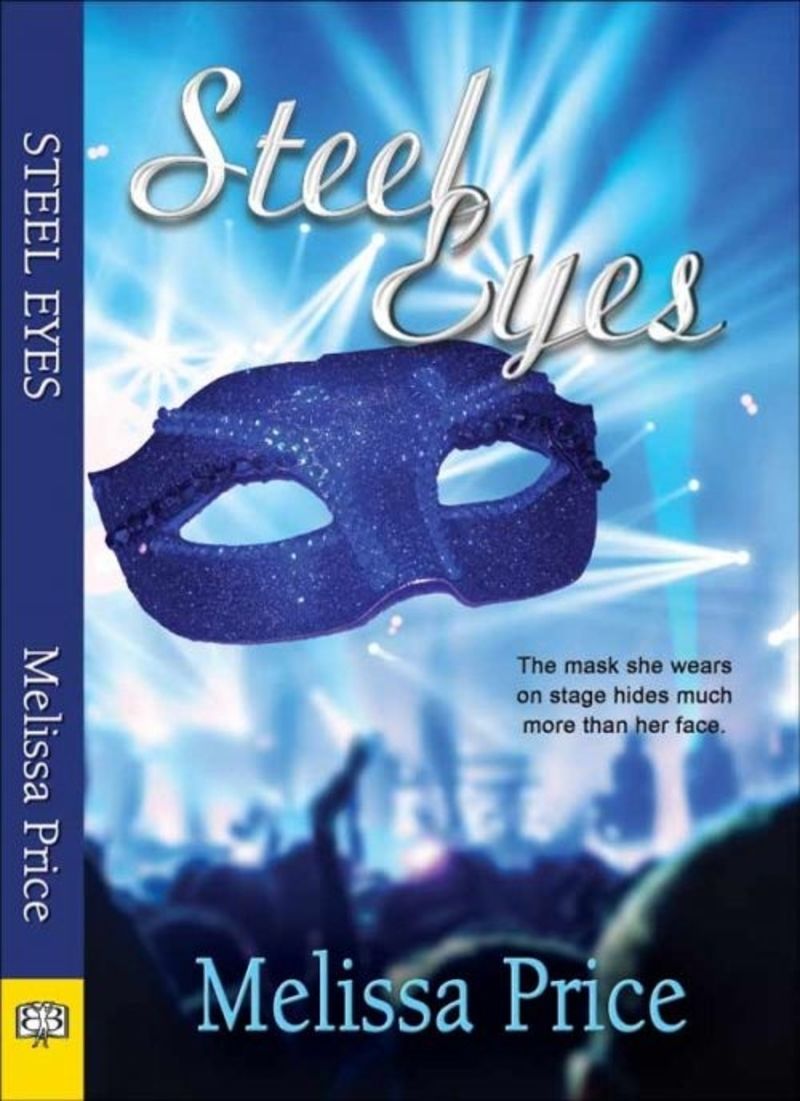 GET YOUR COPY
Prologue

Twenty thousand obsessed fans chanted in three-four time in the arena. The forty thousand feet formed a sort of tribal percussion, banging and stomping; but backstage it all rolled up into an unorchestrated din.

The rhythmic syllables reverberated until the two words merged into one, the same way that the past few cities had begun to blur together.

All but one band member fidgeted through their last-minute backstage ritual, and that was the iconic Steel Eyes herself. Sitting quietly in her intricately jeweled mask and costume, she breathed deep to beckon all of her emotion upward into her throat and down into her hands. She worked it like a snake charmer luring her cobra hypnotically upward, glad the whole time that it was the snake charmer’s very last stop on the tour. She was tired.

After the show, she and the band would have their intimate meal across town, in the private back room of La Maschera on the Upper East Side. During their final late-night meal on the road, Steel Eyes would pretend that every thought for the past month wasn’t about going home. Goose bumps chilled her at the mere thought of finally waking up in her own bed, gazing out at the greenish New Jersey ocean, knowing she could just sleep and eat and then eat and sleep some more.

“Yo! Steel Eyes, get ready, we’re on in five, sweetie,” JJ said as he twirled his drumsticks.

Calmly, Steel Eyes peeked up at him from behind the outrageous painted and jeweled mask. A cross between Catwoman’s mask and cat-eye glasses from the 1960s, the dramatic elongated cobalt eyepiece flared out beyond the stunningly gaunt cheekbones.

With her sparkling, smoky eyes adorned with swirls of color, the chameleon-like gray morphed to blue, sometimes green, depending on the lighting. This was the mask of anonymity, the face of fame. The Steel Eyes mask was as famous as the face beneath it wasn’t, and except for a chosen few, no one knew Steel Eyes’s true identity. She liked it that way. She needed it that way. Steel Eyes never could have existed otherwise.

Deep breath in, exhale, she told herself.

Without the mask, she was invisible—an ordinary person, really, and she got a kick out of that. One night after a show, a rabid fan had pushed her out of the way to get closer to the stage door, unaware it was she who he was waiting for.

“Helllooo. Steely, where are you, girl?”

“Probably making sure everything is perfect for you, as usual.”

Steel Eyes nodded. “I am a lucky girl.” She and Hunt had history, and they had trusted each other with their lives since way before all the Steel Eyes madness.

“You look like you’re a million miles away...even with the mask.”

Steel Eyes stretched her celebrated sinewy fingers and smiled up at him from her chair.

“Your glitter is blinding me.”

“Play that screaming guitar now, and I promise we’ll explore the universe later,” he said when he patted her shiny shoulder.

Steel Eyes filled herself with stillness until she could no longer hear the stomping out front. She was fully present, her hands warm and ready. Temporarily there would be no painful past, no fairy-tale future, no thoughts of the woman she knew so long ago and had never forgotten—the woman who had made her into Steel Eyes without ever even knowing it. There would be only joy; the joy of playing every song she ever wrote for her. So what that it just happened to be her freakin’ hit list.

“One minute, everybody,” JJ said.

In one minute she would storm that stage, pour grace into every measure, and with God-given grit in her hands, she would ravage her pimped-out, whore-red axe Ruby; and she would do it before twenty thousand rock voyeurs...again.

She got up, adjusted her guitar strap, and positioned Ruby up against her, just below her breast, right where she wanted her to be for that very first note, that single droplet in a torrent of inner anarchy, raining down in one searing-hot, orgasmically melodic, grunge-laced note.

A cruel mistress to the ebony and mother-of-pearl fretboard, she would let everyone watch it happen. She wouldn’t give a fuck about her vulnerability because nobody paid those big bucks to watch her do it. The rock voyeurs paid the money to watch Steel Eyes do it. And Steel Eyes always gave them their money’s worth.

He pulled back to examine far beyond the hard mask, the hair, and through the layers of stardom until he was gazing into her own eyes and not Steel Eyes’s. “You know once you take that stage you’ll magically forget about your old flame for a while.”

She and JJ joined the others, everyone taking their usual places...again.

Steel Eyes didn’t tell JJ that her old flame was at this concert. “Let’s go out with a bang, guys,” she said.

Melanie, the bass player, was all pumped up. “Saving the best for last,” she yelled. “Last show. Yeah, let’s make some memories!”

Contrary to JJ’s statement, Steel Eyes had never told him that her inspired performances were the ones where she was infused with the memories of the woman she had simply never been able to forget...well, not in this lifetime anyway.

“Mel, remember we’re doing that minor third dip in the second verse of ‘Somewhere Like You.’”

Above the mob in the darkened arena, neon laser images of the distinctive Steel Eyes mask flew and floated, igniting the chain of events known as the Steel Eyes Flies Tour. The crowd’s thunderous applause greeted the band when the house lights sank to their final shade of black, and the blue gels on the stage lights rendered Steel Eyes’s already blue mask an impossible shade of cobalt.

A deep, frenetic boom of Melanie’s bass guitar set off an explosion of Emphatic Rock; that unique space between classic rock and jazz that Steel Eyes had defined and made famous with her sexy fingers and unrepentant longing.

The drums pop-popped, punctuating the intoxicating wah wah of Rich’s rhythm guitar. The instruments climaxed into a synchronous crescendo, where they smashed head-on into Steel Eyes’s first note.

That one magical metal note. Her every organ screamed with visceral devolution down to each infinitesimal cell when she played that note. She executed it perfectly, milked it for all it was worth, and let it gut everyone who heard it.

“Hey, New York! How are ya!” she screamed into the mic.

Her fingers but a blur to the untrained eye, she unleashed the first hurricane of signature lead guitar licks that had made her into a worldwide brand and phenom. Steel Eyes haunted and provoked. That was her job, after all; that was her passion. Crowds roared in multiple languages and guitars screamed. It was just another day at the office for a woman who had been abducted and held hostage by fame. Fame that circulated in her blood like a poison.

The faster you move, the faster it consumes you, she thought.

That was her last conscious thought before she vanished through what she called her Transcendent Gateway. She slid across the stage on her knees in a steel-string-bending blur, all at her calculated whim, abandon at her command. She drowned out her feelings by playing harder, and the voyeurs were already on their feet. Her body rocked back and forth in time to her spectacular band, and she jumped when she played the high notes, her sparkly long hair swirling around her. She was everyone’s picture of the quintessential rock star.

The shots rang out just before the end of that show. At first, Steel Eyes thought one of the amps had blown. She saw the crowd stampeding toward the exits and heard the screaming. Chaos had erupted.

Crack. A burst of excruciating pain and heat spread from her chest down her arm. One security guard ripped Ruby from her. The size of a tank, her bodyguard tackled her. Buried beneath him, she became faint, teased in and out of consciousness after her head hit the floor. She touched the liquid oozing from her scalp and saw the blood on her hand—felt it in her hair. Steel Eyes struggled to see beyond the stage, not knowing in that moment of burning delirium whether what she saw was fantasy, or a trick of the lights...or was that really the love of her life rushing toward the stage?

“Get the damn medics now!” someone yelled.

The tank named Jean Claude carried her backstage and she heard someone else say, “Easy, lay her on the couch.”

Steel Eyes faded out for what felt like a few seconds, but when she opened her eyes, she was strapped to a gurney and squinting from the harsh light inside the ambulance, with only her knit under-mask on her face.

“That’s it, honey...open your eyes for me. We’re almost at the hospital,” the paramedic said. “Follow this with your eyes.”

Steel Eyes groaned as he continued swinging the penlight back and forth.

“Stay with me. I need you to stay awake. Okay?” he shouted. “Can you tell me your name?”

She tried to focus on their faces, but her vision was blurred and the stark white lights sliced through her retinas.

“I’m here, Steely, I’m right here.” Hunt’s velvety voice floated through her mind when he squeezed her hand. She tried to respond but could not move.

A surge of energy coursed through her veins. The poisonous fame was circulating fast now. Her heart pounded and fluttered, and she couldn’t catch her breath. A movie played in her mind—it rolled in an instant. But in that instant, for the first time, she saw how she got here, right from the very beginning.

“Let the ER know we can’t stabilize her!” the paramedic yelled.

Out of all the fragments of sound, a quiet voice rose inside her head—a woman’s voice; her voice. As Steel Eyes drifted out of consciousness, she heard it say, “Don’t go, baby, don’t go.”

But that was then, and then was a long time ago.
GET YOUR COPY