Author Melissa Price talks about what she learned from Drag Queens

Author Melissa Price talks about what she learned from Drag Queens

When the muse knocks, shimmy to the door to answer!

The Right Closet is a timely, poignant-while-comedic tale. Marinated in farce and baked in a sociopolitical oven, it posits hate and division versus love and unity.

The characters and their story brewed for a long time through years of real world social wins and losses as the tides swung with the political pendulum. In polarized times, I wondered what would happen if two political enemies had a clean slate and didn't know they were supposed to hate each other. Suddenly, the possibilities came into view.

I found my shero in Creama LaCroppe, Puerto Rican drag queen diva extraordinaire. Her best friend, lesbian newscaster, Tawny Beige, gave both Creama and me the gift of persistence—to follow this story to the end.

Creama sashayed into my consciousness as a well-defined composite of my longtime political activism combined with experiences from my youth.

Long before I was of age to go to a gay bar, my gay men friends would dress me up as a drag queen so that we could all go dancing without anyone asking me for I.D. They schooled me in Drag 101, did my makeup, taught me how to smile without letting my lips touch, and assured me that all anyone needed to do drag was big hair.

I had big hair.

Fast-forward a couple of years to freshman year in college as a foreign language major who grew up mimicking accents. At school in Florida, my crowd of gay friends consisted of immigrant and First-Gen Cuban Americans and a couple of African American buddies. As the only white girl in the bunch, I relied on High School Spanish and often imitated my friends' accents to amuse them.

During a dance night in Little Havana at a straight club that vehemently frowned on both gays and whites, I developed a persona tailor made for the occasion. That was the night I began speaking Cuban English so that I wouldn't get bounced from the club. (I'm sure times have changed since then.)

It was only a matter of time before the inevitable happened. One of the guys in the group said to me in his thick Cuban accent, "Oye, Chica. You know, when you talk this way I understand you better!" The deal was sealed. I was already accustomed to hearing my name pronounced "MayLiza", but now MayLiza only spoke in Cuban English.

Drawing on my limited experience as both a faux drag queen and a faux Cubana, it's not a big stretch to think that one day those experiences would collide and produce an extraordinary, write-able character to tell this social and political tale.

But let's roll back to how The Right Closet began. As an activist who had fought in Florida against Anita Bryant, I soon found myself in San Francisco working to get Harvey Milk elected as my Supervisor, and then to defeat California's Proposition 6, the Briggs Initiative, which sought to ban gays from working in the California Public Schools.

Years later in the early 2000s, enduring the constant barrage of sway that the religious-right had gained since Ronald Reagan, I became aware of Ralph Reed, the mastermind behind every successful and noteworthy religious-right candidate. To put it bluntly, the guy both fascinated and scared me. I needed to find a way to make him less scary—to make him a caricature. And although the sociopolitical assault on my community was no laughing matter, it did make me wonder what would happen if a toxic character like Reed met up with a force equal and opposite.

Bam! Just like that, Creama LaCroppe was born, and so was her adversary, Congressman Dick Peak.

Through Creama I channeled my inner Latina drag queen… a fighter for truth, justice, and the American way. Okay, that's Superman, but you get the idea.

It wasn't enough however to make them only powerful adversaries. Call me an optimist, but I kept thinking that this connection could evolve to one that inspired hope and humanity.

The Right Closet was off and running!

But then came a stumbling block. Since the other main character who drives the plot is a gay woman and Diva Creama's best friend, was this a book for men or women? Whenever I pitched the story to both conventional gay and mainstream publishing, I hit a wall. Agents, editors, publishers loved the idea but had no idea where to place it. That sent the original version of The Right Closet straight into the drawer-of-no-return.

Then something weird happened. The LGBT community had unified and gained clout; we suddenly had both conservatives and liberals promoting equality. Seemingly all at once, our long history of battling for scraps evaporated. In what appeared like a singularity of thought, gay marriage was upheld by the Supreme Court and almost in tandem, corporate America opened their doors and policies to inclusivity.

The Right Closet got buried deeper in the drawer.

In 2016, the unthinkable happened with the election of the 45th president. The fight was on again, only this time instead of fighting to gain rights, we were battling to not lose them. It was finally time to rip up the original Right Closet and rewrite it with a fresh and current perspective. What remained from the original was large as life characters, their underlying plot, and a crazy notion that humor, love, and humanity were worth fighting for.

Through The Right Closet, I not only had the opportunity to heal a political divide, more importantly it became a powerful tool to bring diversity into my community. Creating LGBT friends, straight allies, and foes in the context of fiction started to resemble real life, especially as their vast differences gave way to deeper personal relationships.

I think Alexandre Dumas, author of The Three Musketeers was onto something nearly two-hundred years ago when he wrote, "All for one, and one for all."

Melissa Price's latest novel, The Right Closet, will be available from Bella Books on September 16th. Melissa is a novelist who, in the absence of a computer or pen, isn't too proud to write in crayon or spray paint. Her works include the exciting romantic intrigue novels Steel Eyes and Skin in the Game (a Steel Eyes midquel). 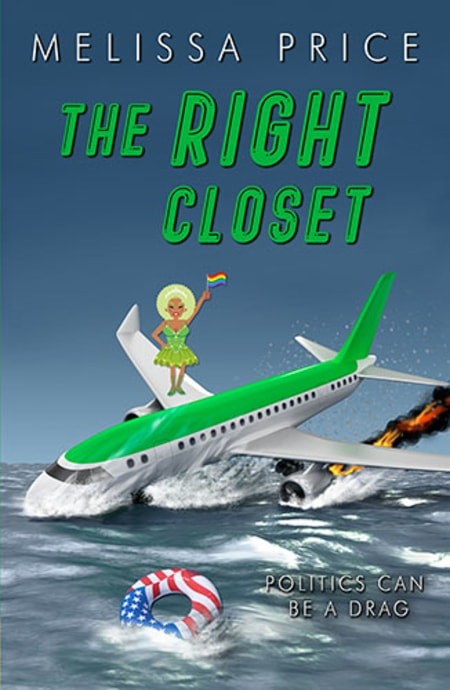 More posts from author
Thursday, 23 May 2019 The Midquel: Is That Even a Thing?
Monday, 20 May 2019 HOW A SIMPLE WRITING EXERCISE TURNED INTO MY NEW ROMANCE, "SMILE NUMBER SEVEN"
Tuesday, 01 August 2017 Skin in the Game: The Steel Eyes Story Continues